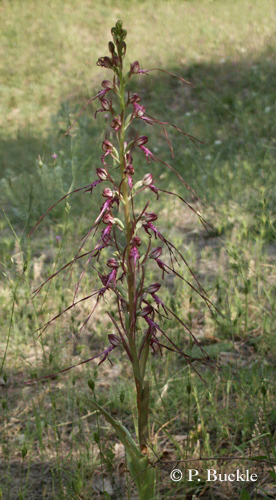 Plants high 60 – 70 cm. Blossoms violet-white with violet ribs and purple spots inside. The lip is 3 – 5 times longer than the other petals. The middle part of the lip is narrow, ribbon like, up to 6 cm long at the beginning of the spiraling.

Placed by kind permission of the proprietor

Habitats and populations. Open sunny places, more often on stony limestone soil, extensively used pastures, among shrubs and forest glades in light deciduous forests. Populations usually cover small areas (up to 0.01–1 ha) and comprise up to 50–100 plants, rarely more. Localities with up to 5 ha have been observed only rarely, but these usually have very low densities.

Distribution in Bulgaria. Locally in the whole country; up to 1100 m alt. More common in the karst areas of the Forebalkan, Balkan Range, Znepole Region, Rhodopi Mts (eastern).

Threats. Local distribution and strongly fragmented populations; afforestation with pines; overgrazing during flowering and fruiting period; abandonment of some territories (in the last decades). In the 1970–80s the change of land use of so called “abandoned areas” into summer house areas resulted in the destruction of many populations.